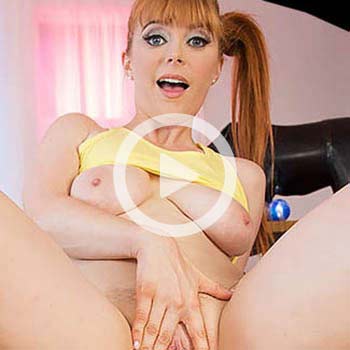 Misty does whatever it takes to catch a Pokémon. Cute as can be Misty with her red hair pulled into a side ponytail, was on the hunt for an elusive Pokémon. She ended up at this guy’s house and he convinced her that a good Pokémon hunter will bang them all, including him. She took off her short jean shorts then got on her knees and pulled his cock out. Pikachu was long since forgotten as she took his cock into her mouth and began to suck it. She made some very sexy eye contact with her pretty blue eyes as she sucked on him then she lifted up her shirt and freed her natural tits as she climbed on top of him and slid down his dick. It was the ultimate game for this gamer girl as she bounced on his cock, spinning around so she showed him her nice ass as she rode. She came twice on his shaft, her tits bouncing as she went then she jumped up and let him shoot his hot load all over her. When it was all said and done she captured the Pokémon between his legs and left with a smile on her pretty face.
Download

Next ArticleJanice Griffith In The Cam Girl