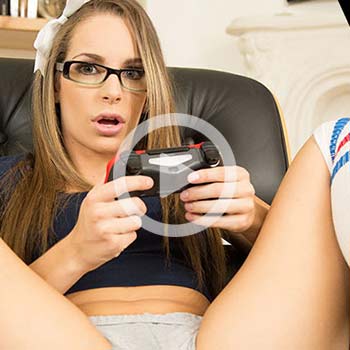 Kimmy Granger loves to play video games and today the sizzling hot blonde babe was hanging out in her bra, panties, and knee socks playing. As she continued to play, she stripped off her bra and panties then she turned to her man, who was playing games with her, and took his hard cock in her mouth. She gave him some amazing head, sucking his cock and stroking him with both hands while making hot eye contact with her glasses on. She told him how she loved sucking cock better than playing games then she got on top of him and slammed herself down on his fat dick. She moaned and talked dirty as she took him deep inside her trimmed pussy, moaning and telling him how big it is and how much it was stretching her out. She couldn’t hold out long as she came all over his dick while her nice, medium sized tits bounced. After the orgasm, she jumped off, spit on his cock, and rode him again, this time, reverse cowgirl style. She oiled her ass up as she bounced so she could reach a finger back and slide it into her ass as she ground herself on his shaft. She came again then jumped back off and jerked him until he exploded all over her face. After he came, she kissed his cock and told him his dick was her favorite joystick and he could play games with her anytime.
Download